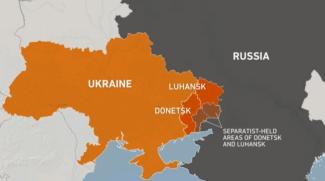 For most of us, it’s a little hard to believe that Europe might soon be plunging into another war.  But the prospect is hard to ignore now that Russia has sent 100,000 soldiers and massive amounts of tanks, fighter jets, missile launchers and other military equipment right up to the borders of the sovereign nation of Ukraine—following up on years of simmering military intervention that has claimed the lives of Ukrainian soldiers on a daily basis.

Lest anyone think that Russia is incapable of brazenly conquering another country’s territory in this day and age, it is helpful to remember that it sent in its ‘little green men’ (later conceded to be Russian soldiers) to annex the entire Crimean Peninsula from Ukraine right after the 2014 winter Olympics.  Russia has also assumed military control of the Donbas region east of the Ukrainian city of Donetsk, under the pretense of ‘protecting’ Russian-speaking citizens there.  In an ominous sign, Russia has reportedly been handing out hundreds of thousands of Russian passports to Donbas, which would offer a pretext to argue that those visitors ‘need to be protected.’

Nor, as most articles have reported, are all the military ‘exercises’ being conducted on the eastern border; in fact, there has been substantial troop movement to the north and northeast of Ukraine, which could signal a multi-pronged attack on the country.

Or it might not.  The Kremlin has denied that there is any plan to attack anybody in the region and maintains that the massing of troops from Belarus and elsewhere is simply a training exercise—albeit a highly unusual one.  And political analysts have pointed out how awkward it would be for Chinese President Xi Jinping if Russia were to launch an invasion while Vladimir Putin was attending the Winter Olympics as Beijing’s special guest.  There is speculation that Russia is simply using the threat of invasion as a bargaining chip to prevent any expansion of the NATO alliance, or that an invasion would stop once Russia had conquered the coastline between Donbas and Crimea.

Finally, military analysts have pointed out that, for all the belligerence and blustering, Putin’s Russia has been extremely shy about direct military confrontations in cases where the enemy is capable of fighting back—and with U.S. aid, the Ukrainian military definitely has the capacity to inflict painful damage on any invasion force.  Putin seems to have a knack for manufacturing crises and then resolving them in ‘benevolent’ gestures, rather than risking the political consequences of large losses of soldiers’ lives.

What does all this mean to us sitting safely on the far side of the ocean?  If there does happen to be an invasion, we can expect a certain amount of panic in the markets, due to the threat of economic destabilization and uncertainty that such a shocking development would trigger.  An invasion could disrupt Ukraine’s agricultural production, which is surprisingly important to the world’s food supplies.  It is estimated that Ukraine farmers account for about a sixth of the world’s corn exports.

There would also be some as-yet-unmeasurable impact on world energy supplies.  Russia supplies about 30% of the European Union’s natural gas, which could be interrupted, raising global energy prices including here in the U.S.  An invasion would almost certainly be followed by severe economic sanctions, which means Russia’s ability to export oil could be hampered or even crippled.

Perhaps most importantly, all of us—as citizens of the world and as investors in what we always hope will be a peaceful and productive economic community—would feel less comfortable about the global political environment if we were to witness the brazen invasion of one European nation by another.  The threat of war is unsettling enough; a real one, playing out on the evening news, would be undeniably scary.