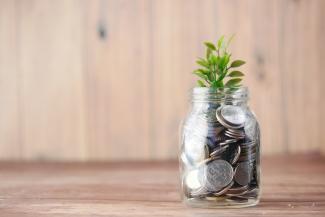 We’re constantly hearing about investment returns and market movements in the consumer press—where yesterday’s returns are reported as news, even though history has conclusively shown that short-term market movements are nothing more than meaningless white noise.

You hear virtually nothing about savings rates in the press.  So which is more important to a person’s long-term financial health?

There’s a secret that financial planners and investment advisors understand all too well: investors (like you) have a lot more control than the professionals (like them) over how much money you will ultimately have in your retirement portfolio.  Seemingly small changes in savings rates can have far more impact on the growth of an investment portfolio than market returns.

Let's take a simple example.  Suppose Jonathan has an income of $100,000 per year and manages to save 1% of his total income each year for 20 years--which would actually be above-average for many people in our society.  Let's assume Jonathan's salary goes go up 2% a year with the cost of living.  Finally, we'll assume that he's able to earn a very generous 8% yearly return on his portfolio.  (Important caveat: all return assumptions you read here are purely hypothetical and for illustration purposes only, and should not be regarded as an indication of what we or any other advisor might achieve in the unknowable years ahead.  For all we know, the markets may be more or less generous, and they will be so in unpredictable ways.)

Now let's suppose that a second person, Joanna, sets aside 7% of her income each year.  Alas, Joanna experiences a less favorable investment time period, and her portfolio goes up just 4% a year--half of what Jonathan was earning.

Even so, after 20 years, Joanna's portfolio is worth $373,183.84--more than three times more more in retirement wealth than Jonathan's, even though Jonathan had a much higher rate of return on his portfolio.

If Joanna were to save 10% of her income--which is the minimum that most financial advisors normally recommend--and if she were to get the same rate of return as the less thrifty person with a 1% savings rate, her terminal wealth would be almost exactly TEN TIMES as much as Jonathan's.

As you know, the numbers are never this tidy; you would never earn the same return each and every year, and most of us don't receive the same salary increase from one year to the next.  But the point, which can be made with much more complicated illustrations, is that, in general, savings rates matter more than rates of return, and seemingly small changes in savings habits can add up dramatically over time.

No matter what you read in the press, savings rates are more important than investment returns—and they have the added benefit of being more or less under our control.