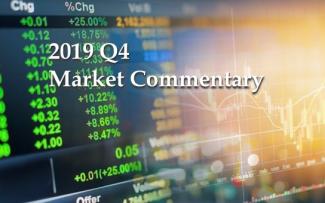 Let me take you back to 2010…yes, a decade ago…when President Obama signed the Affordable Care Act into law, more than 206 million gallons of oil was spilled into the Gulf of Mexico, Mark Zuckerberg was named Time Magazine’s “Person of the Year” and Apple introduced the first iPad.  On the international stage, Haiti was hit with a destructive earthquake, ash and debris from a volcano in Iceland caused major air travel disruptions in Europe, and Dubai opened the tallest building in the world – the Burj Khalifa.

If you also remember, the financial news was talking about “The Lost Decade” where the S&P 500 Index from January 2000 to December 2010 had returns that were at a loss!

Since returns this decade have been so positive, there is no way that the market can continue up, right?  Not so fast my friend!  If we look back at market returns since 1900, we can see several plateau decades followed by even longer runs in equity markets.

So, where do we go from here?  Will this bull market continue?  Only time will tell, but taking a step back we can see that it is not unheard of for long-term up trends to last a couple of decades.

"If voting made any difference, they wouldn't let us do it," Mark Twain once quipped. All kidding aside, as we head toward a U.S. presidential election in November, you may be worried that a contentious election season, or a certain outcome, could push the U.S. economy into recession and send markets south.

But a look at history shows that presidential elections have made essentially no difference when it comes to long-term investment returns.

What has mattered is staying invested! Looking at election results back to 1932, stocks have trended up regardless of whether a Republican or a Democrat won the White House. Investors who held on for at least a year were rewarded for their patience, though they had to withstand some wild swings during the primaries.

Election-related volatility can produce some opportunities for our clients.  When stocks decline in value, we have the opportunity to purchase additional shares at a discount – rebalance.

We will leave you with a quote from one of your portfolio managers, Greg Johnson with American Funds.  "Investing during an election year can be tough on your nerves, but it's mostly noise and the markets carry on. Long-term equity returns are determined by the value of individual companies over time. So it's better to stay invested than sit on the sidelines."

We are endlessly thankful to you for trusting us with your financial planning.  As we enter another decade, we are reminded that we wouldn’t be here without you!

What was the best performing stock of the decade?  Click HERE to find out.