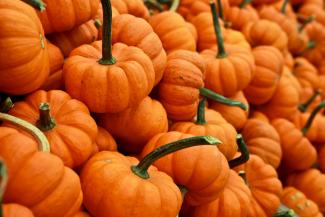 The Facts About Pumpkins

The runup to Halloween is pumpkin season, the season of jack-o’-lanterns, pumpkin pie and pumpkin spice lattes (for those who are into that sort of thing).  But did you know that pumpkins are native to the New World, and were completely unknown outside the Americas until the late 1500s?  Or that pumpkins are actually a fruit, related to winter squash, cucumbers and melons?

Pumpkins are unusual in other ways.  The skin, leaves, flowers, pulp, seeds and stem are all edible; you can eat not just the entire pumpkin, but the entire plant that produces it.  And they’re low-calorie; pumpkins are 90% water.  They contain more fiber, pound per pound, than kale, more potassium than bananas, and are full of heart-healthy nutrients like magnesium and iron.  Pumpkin pies are America’s second most-favorite pie, behind apple pies.

Over 1.5 billion pounds of pumpkin are harvested in the United States each year, almost all in the month of October, and a single U.S. state (Illinois) produces more than half of the total.  And we know what you’re waiting to ask: the heaviest pumpkin ever grown was harvested in Germany, all 2,624.6 pounds of it.  (See image.) 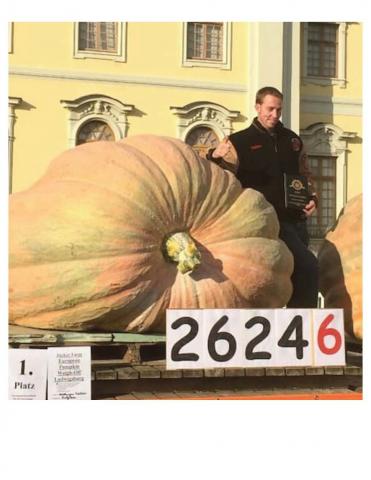