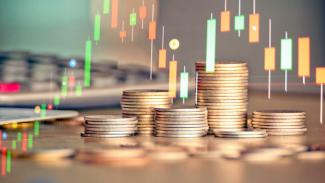 The finance magazines and websites tell us “10 Dividend Growth Stocks You Can Count On” (Kiplinger), or “20 Dividend Growth Stocks Blasting Off” (Forbes).  There’s an annual “Dividend Aristocrats” list of 65 companies, and occasional articles telling retirees that they should buy stocks so they can live off of the dividend checks.

The interesting thing about these clickbait articles is that they don’t provide much historical context—and recent history has not been pretty.  In 1873, a basket of large-cap stocks (similar to the S&P 500) would have provided you with a 7.47% annual income—that is, you would have gotten roughly 7.5% a year back from whatever amount you invested.  The dividend rate peaked at 10.15% in 1917, and has generally hovered between 3.5% and 6% since then, up until around 1990—though mostly around the low end in the 1980s.

Since then, companies, in aggregate, dividend distributions have been much stingier as a percentage of stock prices.  This is partly because many companies prefer to reinvest the money they take in from operations to increase their enterprise value and, therefore, the value of their stock.

More recently, reinvesting had also become a tax-efficient strategy for shareholders.  Until 2003, dividends were taxed as ordinary income, while stock returns, if the position was held for more than a year, was taxed at lower capital gains rates.  But today, qualified dividends (which is most of them) are taxed at a 0% rate for taxpayers earning $40,400 or less (joint filers: $80,800), a 15% rate for individuals earning between $40,400 and $445,850 ($80,800-$501,600 for joint filers), and 20% for singles earning above $445,851 and joint filers earning more than $501,601.  The bottom line is that receiving dividends today is actually more tax-efficient than a comparable increase in enterprise value.

Dividends fell into the 2% range since 1990, and, with little fanfare, dropped to a historic low of 1.28% today.  Nobody should seriously suggest that a 1.28% income rate on your money is a reasonable way to fund your retirement expenses.

Today’s low dividend rate is undoubtedly driven by tax considerations and the need for spare capital in this complicated economic environment—but those are not the main drivers.  The low rate is a result of the rapid increase in stock prices over the last couple of years.  People today are paying more for their stock shares than they were just a couple of years ago, and much more than they did in March of 2009, when the current bull market began.  Buying income is more expensive in both the stock and bond markets today, which is why most financial planners recommend that instead of trying to live off of dividends, or bond yields, or any other single source of income, people create diversified portfolios and take their income from the overall gains—wherever they happen to come from.