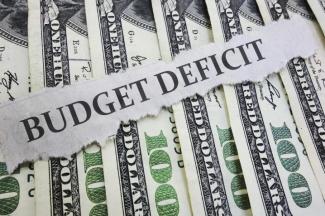 The U.S. budget deficit is growing and out of control.  Right?

In actual fact, the U.S. government has become rather thrifty, of late—at least in comparison with its past profligacy.  Last year, the government spent $2.775 trillion more than it took in in tax revenues; the year before that, the deficit reached $3.1 trillion.  This year, that budget deficit will shrink dramatically, to ‘just’ $1.036 trillion.

The chart shows how, since 2001, the government has put more money into the economy, and issued more IOUs (Treasury bills and bonds) than it took in, year by year.  The Great Recession years were (most of us thought at the time) doozies, with deficits over $1 trillion.  But then came Covid, and the deficits exploded to unprecedented highs.  The chart doesn’t show 2022 (we are only a third of the way into the year, after all), but imagine the next bar returning to the 2019 level and you can see how Washington has been tightening the reins.

Going forward, there are several complicating factors.  One is inflation, which is driving up interest rates, which drives up the rates that the government will have to pay on newly-issued bonds.  We now know that inflation is not ‘transitory’ (as the Federal Reserve economists were insisting a few months back), but we don’t know if the current levels will be sustained.

But the bigger question is: how much does all of this actually matter?  When the economy runs a deficit, that means that the government is making more Treasury securities available to the investing public—we lend money to Uncle Sam and receive interest until the bond matures, at which point the government can find other borrowers—or sell us a new bond.

There is certainly no shortage of things to worry about, in the world, in our personal lives, pretty much everywhere.  Taking on the worry of a budget deficit that is actually (finally) coming back down to earth should probably not be at or near the top of our list.